It is our turn now because the misery caused by the Left and Wokeness will ignite the largest influx of conversions to Christ we have seen in our lifetime. The billions of dollars spent to erase the Christian faith will prove to be an utter waste. We are entering a season where Christian influence in America will greatly increase.

He who holds power to reverse plots, make plans backfire, and boomerang the wrath of man has been quietly working. Soon His handiwork will be revealed. It is a massive harvest of souls that are being ripened by misery, corruption, and tyranny. How do I know this is true? Because I have already seen it. 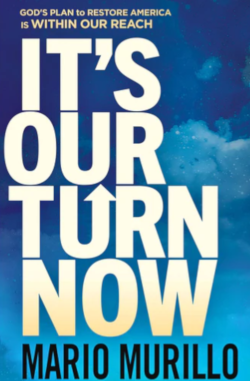 I wrote this book, “It’s Our Turn Now” (Charisma House, 2023) because something shocking and unexplainable started happening in our tent crusades. At the height of a pandemic lockdown—in California, the bluest state in America—thousands were being converted to Christ.

You can barely get Californians to a Christian meeting when it is convenient. But then they started coming during a lockdown. It filled me with questions: Why were they overflowing the tent now that leaving their house was almost impossible? What was happening? Why was it happening?

“It’s our turn now.” That phrase kept repeating in my heart. It was a clue of some kind. The feeling kept growing within that I would witness some great event. Then the scales fell off my eyes.

I realized that, as glorious as our tent crusades are, they are only a small part of a great and widespread phenomenon brewing nationwide. That is why I believe there is an urgent warning from the throne of God to get ready for harvest.

The church has been through so much these last few years. The last thing we need is a book that raises false hopes. This book’s message is not another case of prophetic wishful thinking about some future event. This is happening now.

Yes, evil is exalted in America. Yes, it looks bad for the church. Indeed, those who control the teleprompters have a clear message: “Christians have no place in the America we are building. You are not wanted—and soon you will be discarded.”

But listen to Jesus in John 4:35: “Do you not say, ‘There are still four months and then comes the harvest’? Behold, I say to you, lift up your eyes and look at the fields, for they are already white for harvest!”

Jesus is telling anyone who will listen that the harvest is now. Do not think more must happen before we harvest souls. Do not look at the frightening pictures. Look with spiritual eyes to the fields.

I will show you why all the armies in the world cannot stop a vessel of God whose time has come.

The images of hatred and rejection do not tell the real story. You can see something wonderful if you look beyond the stage props. My claim that Leftists and atheists are setting us up for a harvest of souls is not a knee-jerk outburst; it is a settled conviction.

I do not want to make a motivational speech. I want to make an airtight case. I will show you why all the armies in the world cannot stop a vessel of God whose time has come. {eoa}

Mario Murillo rose from poverty in the Mission District of San Francisco. After being revolutionized by Christ, he felt a call to evangelize at the University of California at Berkeley. The students rejected his efforts until a desperate prayer led to an unprecedented supernatural outpouring. Students started to report miraculous healings. After a four-day conference in San Jose, California, extended to six months, with nearly 250,000 people in attendance, he launched his international ministry. Since then Murillo’s voice has been heard by millions around the world, bringing a message that zeroes in on the hurts of society and Christ’s power to end addiction, racism, violence, and disease.