In an attempt to glorify God and establish that prophetic ministry is for today, Morningstar President Chris Reed shares recent prophetic words that have come to pass with date and time stamps to encourage the body of Christ.

“I think it’s important to acknowledge when prophecies we can prove when they were shared, when they were received ahead of time, come to pass,” Reed says.

We sat down with Reed for an exclusive Charisma News interview, and this is part-two of our conversation. In part-one, Reed shares what God has showed him for 2023 and beyond. You can read that full article here.

These are very specific words that God shared with him that he says were given ahead of time.

“In June of 2021, I prophesied from a vision an encounter where I saw a major hurricane hitting the west coast of Florida, particularly Tampa and St. Petersburg.”

Just over a year later Hurricane Ian came and hit the west coast of Florida, a hurricane that was called a once in 100-year storm. “That part of Florida hadn’t been hit by a hurricane in over 100 years. I believe it was a sign of a move of God coming to that area.”

As Hurricane Ian was voraciously approaching Tampa and St. Petersburg it took a last minute turn down to the Ft. Myers area.

On Aug. 18, 2022 Reed wrote that “a tragedy would will befall the Pelosi family that will catch the worlds eye. We need to pray for Nancy’s child/children, regardless of how much we disagree with her views,” he says.

“Everyone knows about what happened over two months later when someone broke in her house in San Francisco and violently attacked her husband. It did catch the worlds eye. I’m a firm believer that we need to pray for everybody if the Lord shows us these things,” he says.

Reed references Agabus from the book of Acts. Agabus went from Jerusalem to Syrian Antioch to find Paul. In Acts 11, he prophesied that a great famine would “spread over the entire Roman world.” The purpose of his word was for Christians to respond. The Christians in Antioch gathered together money to send to their brothers in sisters in Judea.

Later in Acts 21, Agabus gave a personal prophetic word to Paul to prepare him for what would come in his trip to Jerusalem. It was up to those who heard both of those words on how they were going to respond. “God does speak this way,” Reed says. 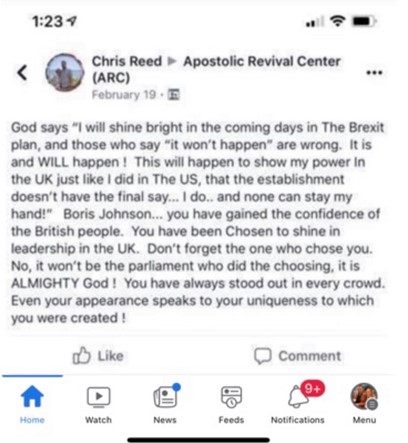 In Feb. 2019, Reed prophesied that Boris Johnson would become the Prime Minister of the UK and that “The Brexit plan, and those who say ‘it won’t happen’ are wrong. It is and WILL happen! This will happen to show my power in the UK just like I did in the U.S., that the establishment doesn’t have the final say…I do…and none can stay My hand,” Reed wrote.

The word continues, “Boris Johnson…you have gained the confidence of the British people. You have been chosen to shine in leadership in the UK. Don’t forget the One who chose you.”

Although he is no longer the prime minister, the word was one year before the election. “I don’t think God is done with him, I think he will reemerge in a place of power and position to fulfill,” he says.

Aug. 8, 2020 Reed shared publicly on social media that he saw in a vision that President Donald Trump was in danger. He called everyone to come together to pray for the safety of Trump. In the vision he saw “an attempted shot fired at him.” 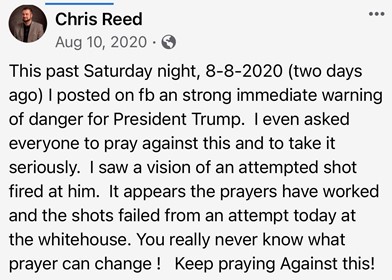 Two days later, on Aug. 10, 2020 headlines popped up all over the mainstream media that Trump was giving a speech when his secret service rushed him out live on TV because shots were being fired outside the White House.

On top of these listed, we interviewed Reed over a month ago about a prophetic word he received on Oct. 1, regarding the future of China’s Xi Jinping. Two months after his word on the downfall of Xi Jinping, headlines came out of China showing his rule and support within the Communist Party already waning.

In the rest of the interview with Reed he shares what God has shown him for America and the world in 2023 and beyond. You can watch the full interview here.