In Matthew 12, Jesus spoke one of his many parables. Beginning in verse 43, He warns that:

“When an unclean spirit goes out of a man, it passes through dry places seeking rest, but finds none. Then it says, ‘I will return to my house from which I came.’ And when it comes, it finds it empty, swept and put in order. Then it goes and brings with itself seven other spirits more evil than itself, and they enter and dwell there. And the last state of that man is worse than the first. So shall it be also with this evil generation.” (vv. 43-45).

In his blockbuster book “The Return of the Gods,” Jonathan Cahn expounds upon that warning. In an interview with Amanda Grace of Ark of Grace Ministries, Cahn explains:

“Jesus gave a parable, and it’s the parable of the spirit. He said if a spirit leaves a man, it goes looking for a place to dwell. I’m going to go back to my house, back to the gods, because they inhabit people. He finds the house empty, swept clean. He goes back and he gets his friends, seven other demonic spirits. … They go back, they repossess the man, or the house, and the Lord says the last state is worse than the first. In Matthew, Jesus says ‘so it shall be with this generation.’ It’s an entire generation, so now we’re talking about something very big … 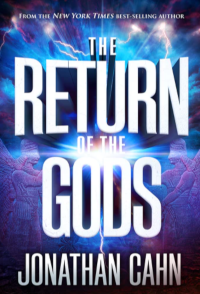 Cahn gave this warning to America:

“This warning is to the West. It’s happening. So, what’s been happening for the last half century or so in America? We are experiencing a case of repossession; the ancient pagan spirits are inhabiting our culture and they are paganizing it. Their aim is to take a Christian culture and turn it into a pagan one. This is what is happening to America.

For the rest of Amanda Grace’s interview with Jonathan Cahn, click here.